Posted on September 24, 2014 by themanabroad

So here we are at the last stop on my Nepal trip, Bhaktapur. The former capital of Nepal until about the 15th century, this place is known as a living museum for good reason. It simply oozes history from every wall and every cobbled street. Upon arriving we had to pay a relatively extortionate amount to enter past the outer walls to be able to even start looking for hotels. 1500 rupees for me as a western person and just 500 rupees for my Chinese girlfriend. Sucks to be British in Nepal!

It did not take long to locate a decent hotel, and for just 900 rupees a night, it was an absolute steal and right in the center of everything! Heading straight back out and having a short walk around, we found a restaurant that only sold buffalo meat momo’s, and that was where we had our dinner. And these were easily, hands down, the best momo’s we had eaten during our stay!

And for just 50 rupee’s each, these were CHEAP, so needless to say that we came back here…many many times!

It wasn’t long before the last of the day light faded and the city was bathed in darkness. We were pretty tired by this point and had decided that we would head back to our hotel to get an early night so we could begin afresh the next day. However to our surprise in the main square outside our hotel there was  an anniversary celebration of a yoga…thing (getting an explanation from a local proved challenging, hence my lack of knowledge on what this actually was!). The whole Taumadhi square was covered in candles, including a large rectangular temple found at one end of the square illuminating the whole area in a soft yellow glow, this was truly spectacular and we were very lucky indeed to witness this one off event! 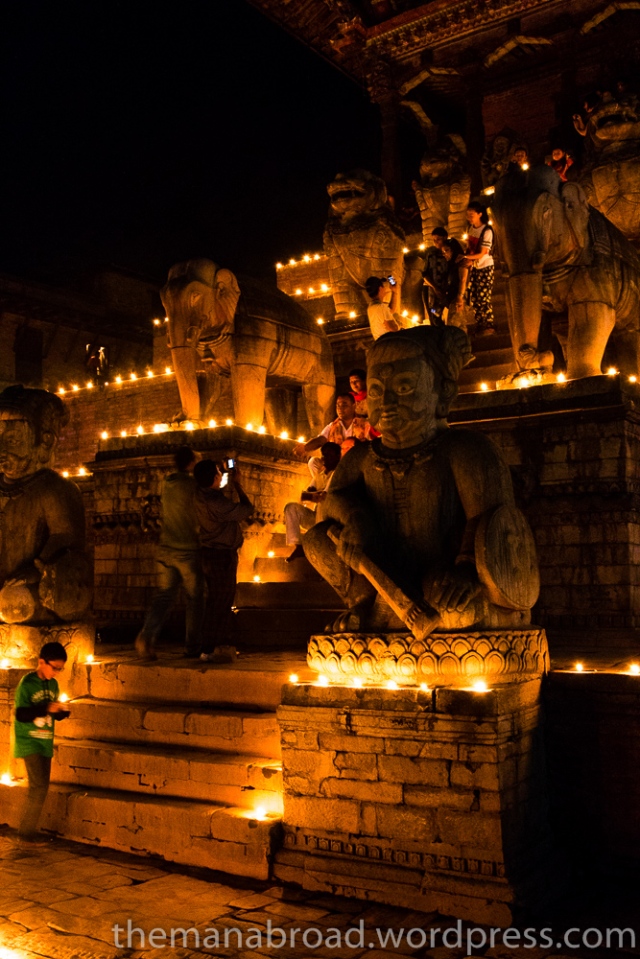 Unfortunately we didn’t have long in Bhaktapur, only one and a half days in which to soak it all up. So we decided that we would spend the full day roaming the streets, getting lost and seeing everything that we wanted to see, which included the pottery square, Durbar square and the Taumadhi square which we had seen last night. At first Bhaktapur seems like a bit of a maze with all its cobbled streets lined with hawkers, pottery  and woodcraft sellers and the many many providers of street food. Which incidentally I found interesting, as barring one place I found that sold savory street food…everywhere else was selling sweet cakes, cookies, biscuits and other things that I simple don’t know how to describe. All of which in an array of bright colours, but none of which really appealed to me. 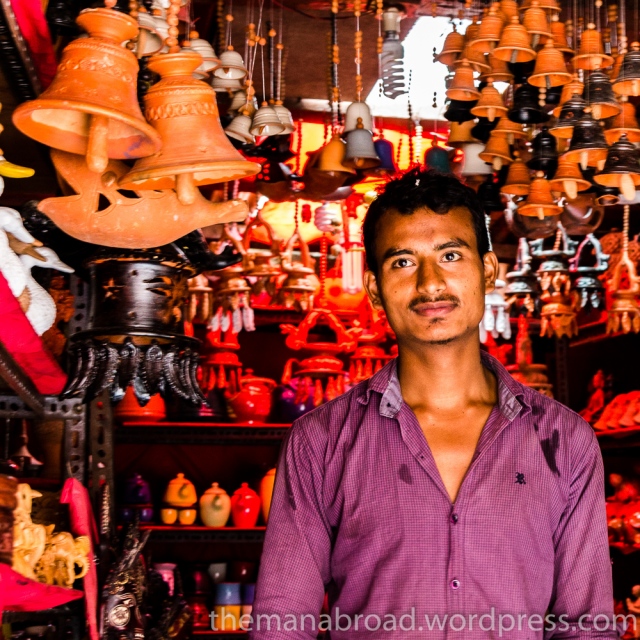 Two things in particular caught my eye in Bhaktapur, first was the way the locals decorate their doorways. The number of times we saw beautifully coloured and intricately designed entrances in to peoples homes often with the eyes of Buddha incorporated in to the designs somewhere. These I found very interesting and I often found myself drawn to them, and to photograph them. 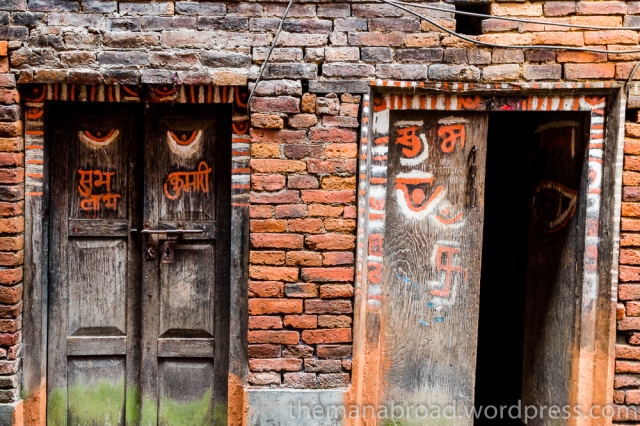 The all seeing eye

The second thing that I couldn’t help but notice and also want to photograph was the sheer abundance of stray dogs, some of which in better condition than others. Coming from the west I am a bit of a dog lover, and I couldn’t help but feel a bit sad at the sight of some of these animals! Having said that, it’s still better than some parts of China where they would likely eat some of these dogs. 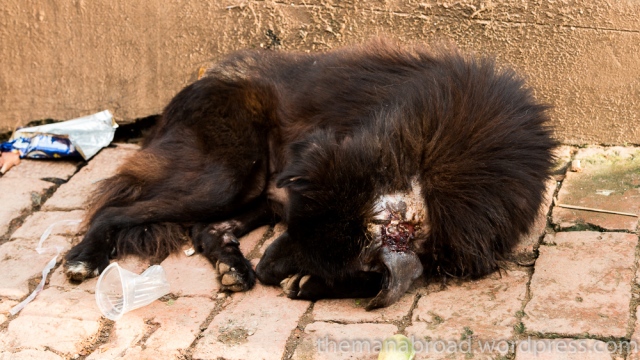 Bhaktapur is a place in Nepal that I would definitely recommend to anyone to go and visit, it isn’t a place that requires longer than a couple of days to explore, but if you wanted to get out of the city and explore the outer reaches such as places like Nagarkot which is a large mountain, then I would recommend an extra day or two.

We spent our extra half day doing a bit of last minute gift shopping, going back to the pottery square for me to buy some pottery wind chimes, and back to the woodcarver to buy one or two pieces off of him.

Here are a few of the other photos I took in and around Bhaktapur, I hope that you enjoy them. 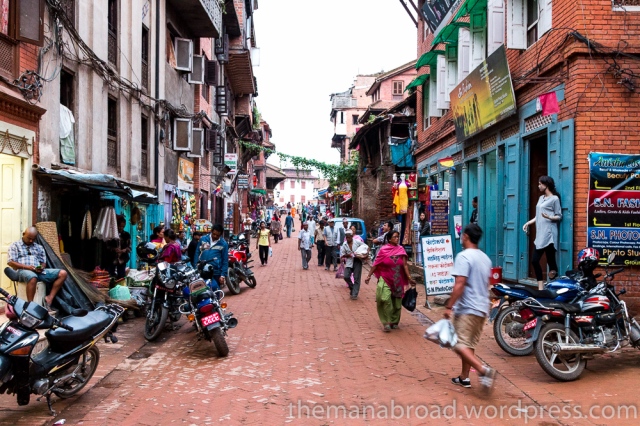 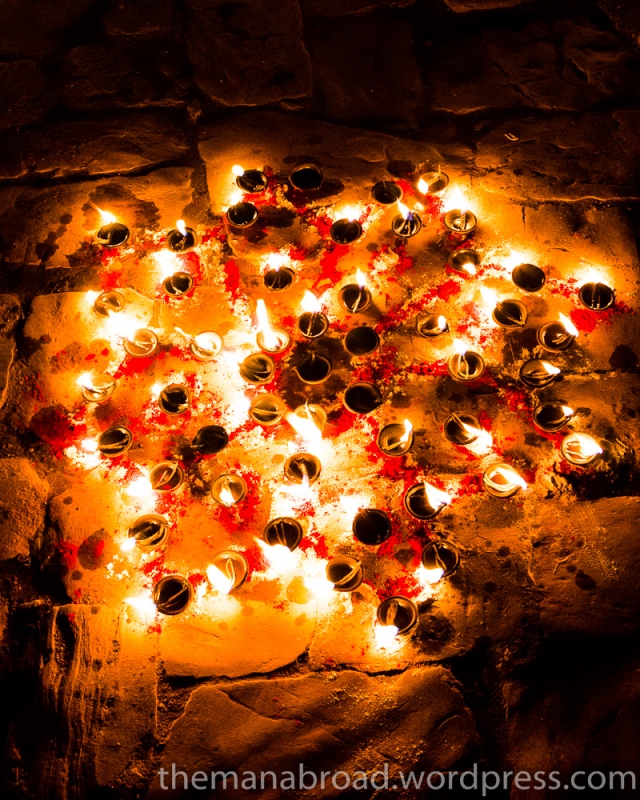 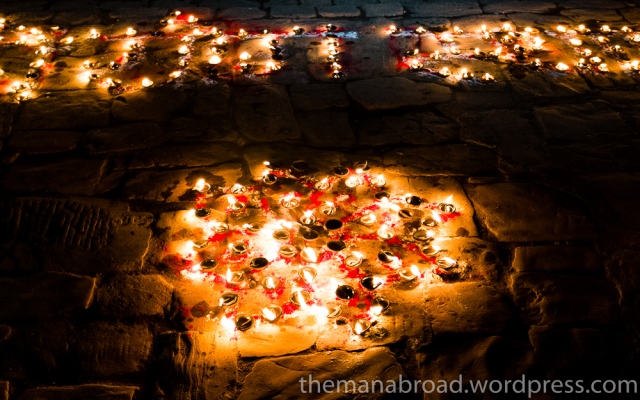 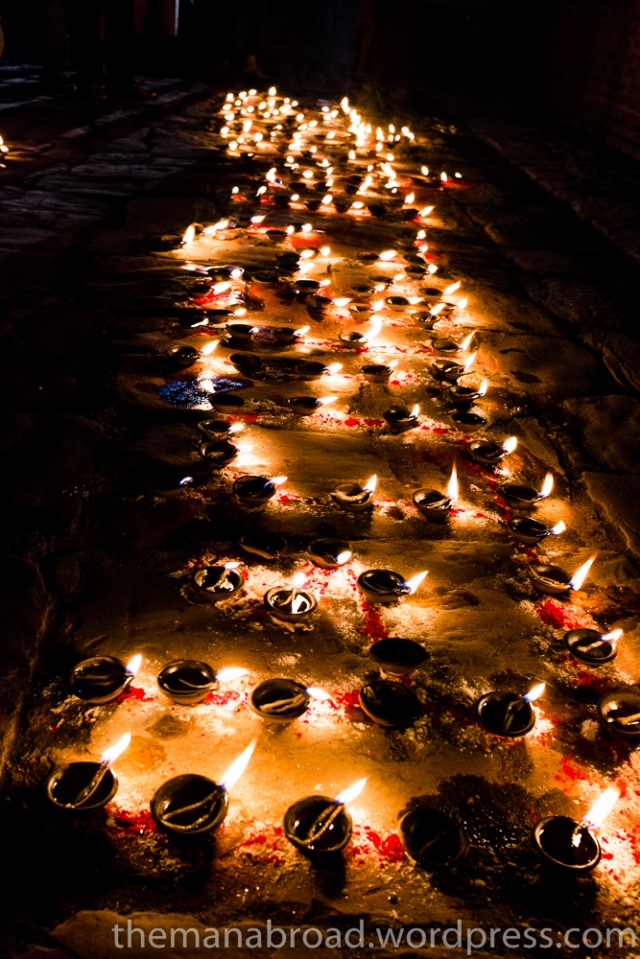 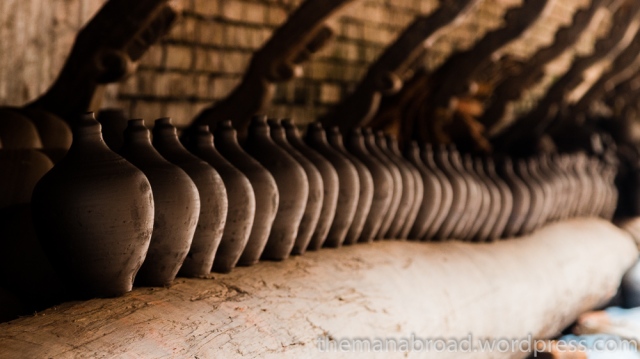 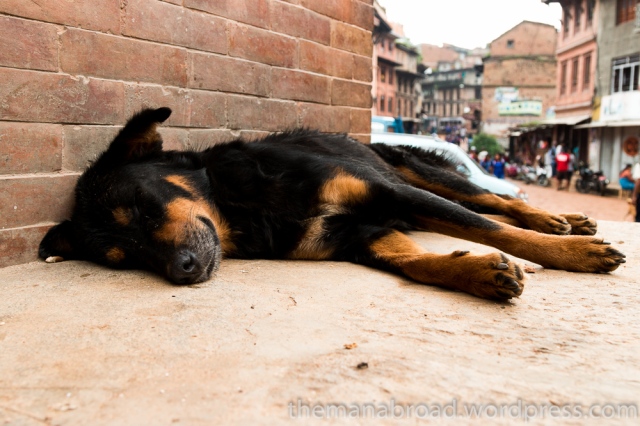 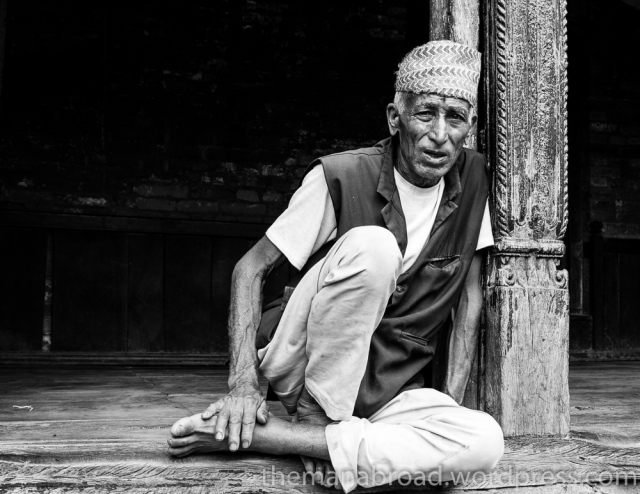 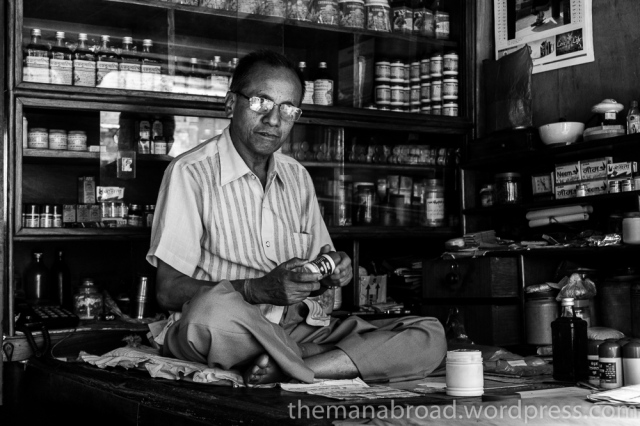 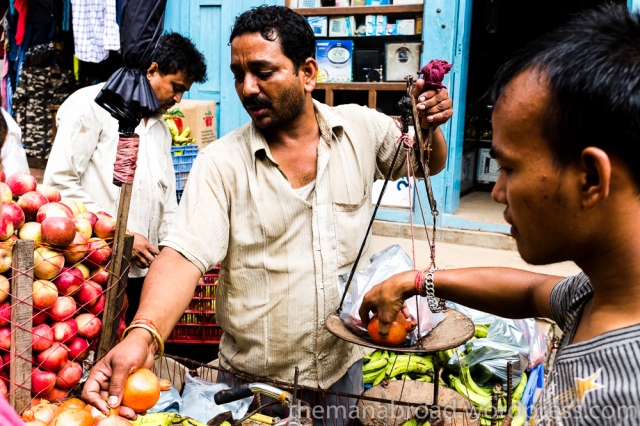 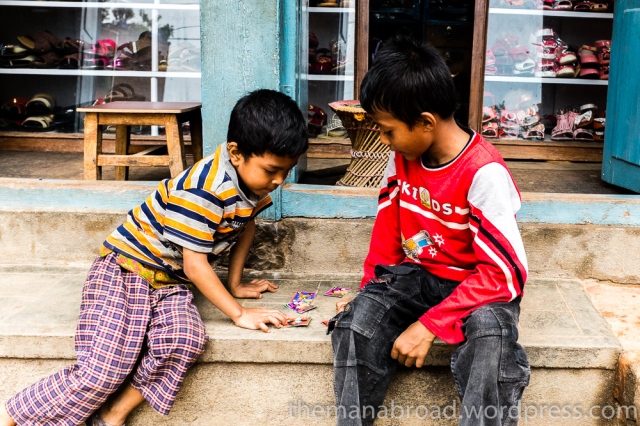 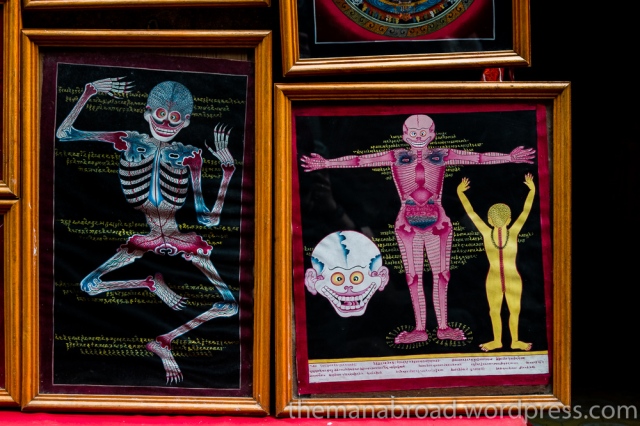 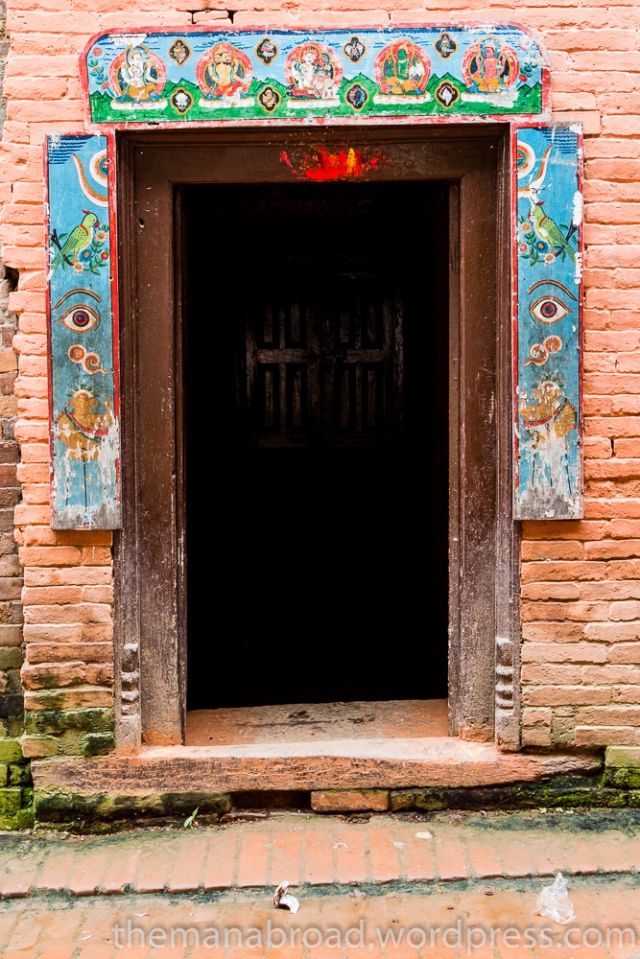 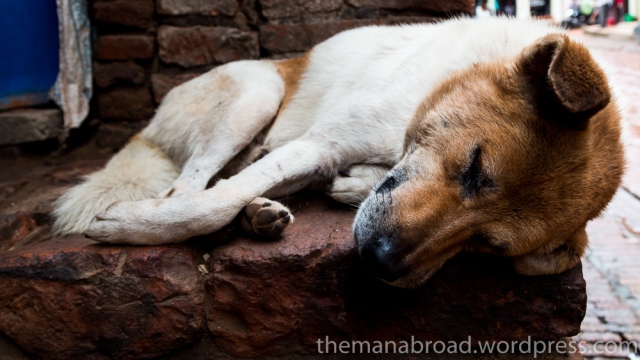 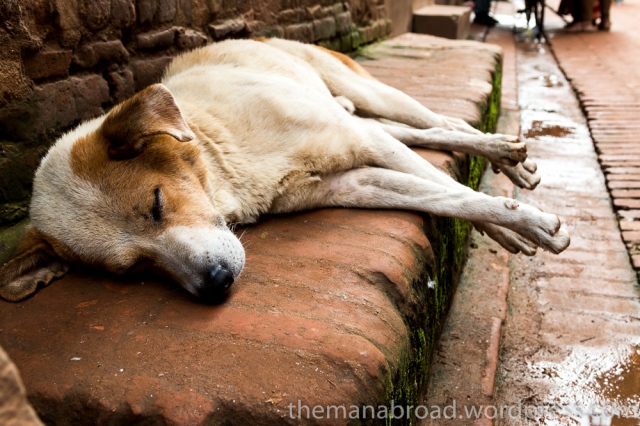 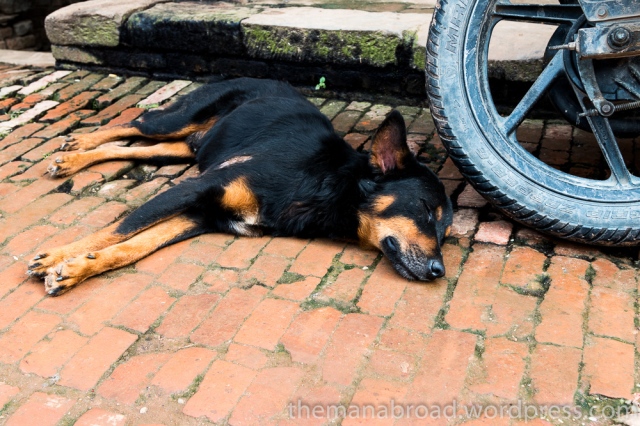 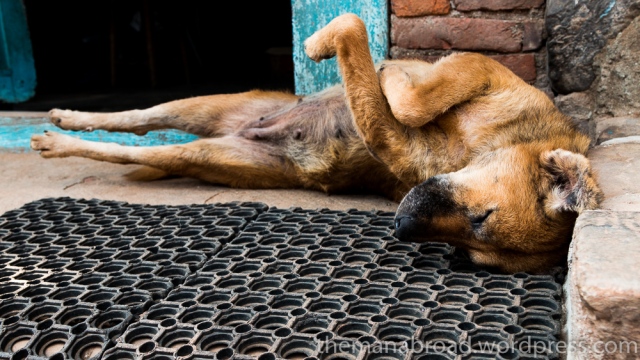 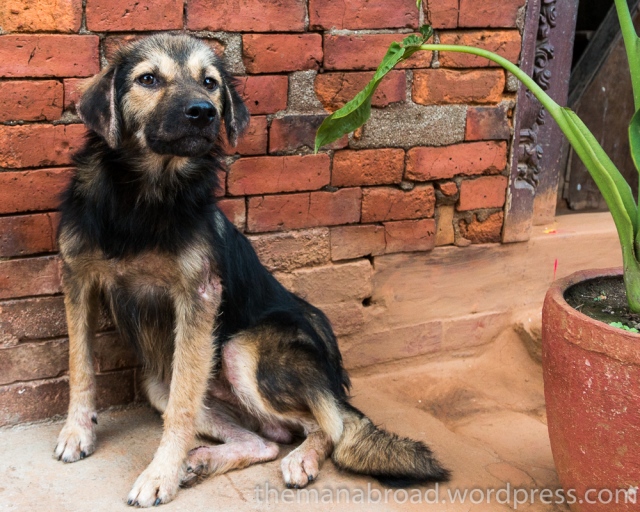 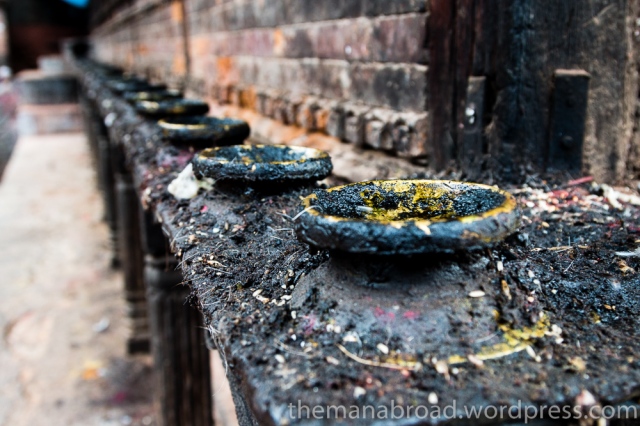 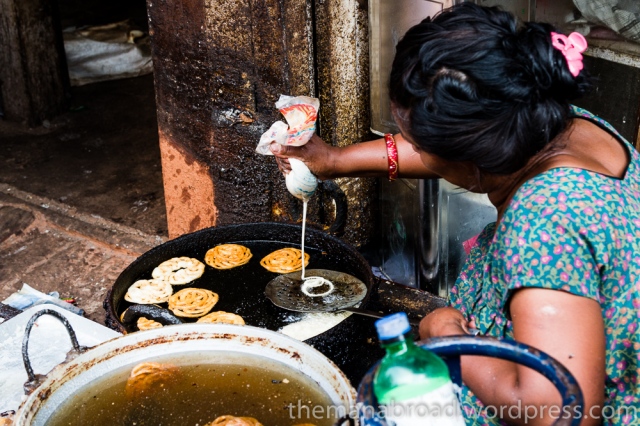 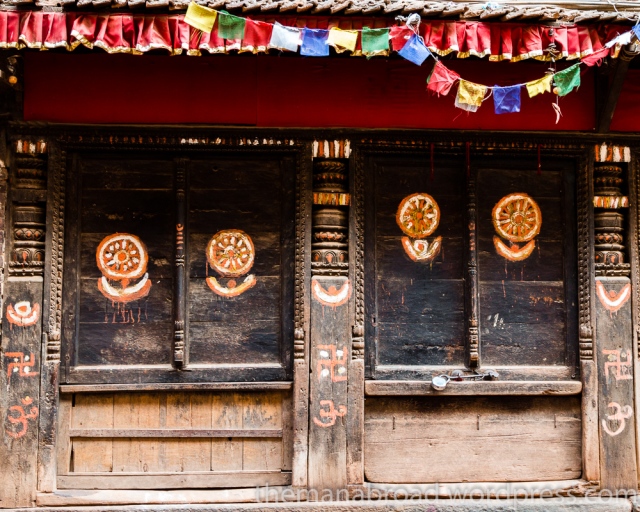 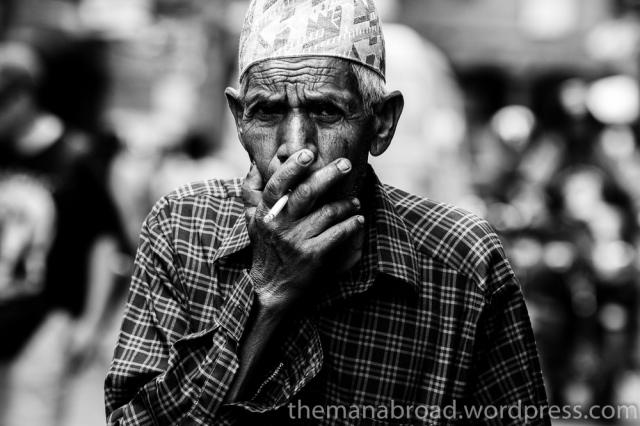 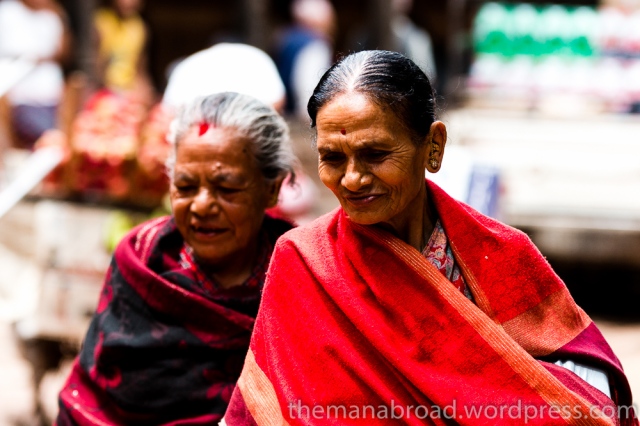 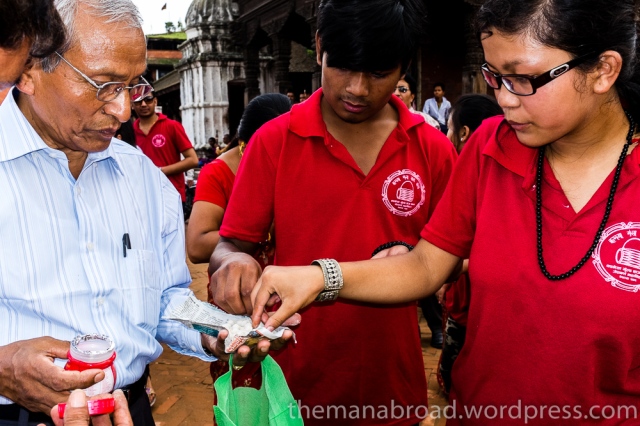 So I suppose it’s about time I wrapped up this chapter of my travels to Nepal, this place was truly as amazing as I had hoped it would be and I wouldn’t just recommend people go to visit this country, I would urge people to go. Go and experience the awe inspiring sights, the varying different smells and sounds, meet the friendly locals and the interesting travelers. Go and completely immerse yourself in the culture and soak it up, because this place is just magnificent. It has been about a month now since I have been in China, and I find myself constantly thinking about how I want to go back. Go back to Chitwan and try and photograph that pied kingfisher, go back and eat one more dal bhat, go back and spend more time with the family of the Euriko hotel in Pokhara, go back and do some serious trekking. Nepal has certainly left a deep impression on me, and I would like it to leave a deep impression on you too.

So until next time,

I am themanabroad, known by my friends as James and my colleagues as Zhan Mu Si (Jaa More Suur(James in Chinese)). I have always been enthusiastic about photography and travelling, since school always trying to sign up for photography classes that always got cancelled unfortunately. However, living in China has given me the time and opportunity to combine my two loves, so please come and join me in my life in South-East Asia.
View all posts by themanabroad →
This entry was posted in Asia, China, Nature, Nepal, Photography, Travel, Travel Photography, Uncategorized and tagged adventure, animals, asia, Bhaktapur, birds, environment, food, Kathmandu, Nepal, pagoda, people, photograph, photography, photos, themanabroad, traditional, travel, travel photography, travelling. Bookmark the permalink.