So here we are again, another week and another post.

Now one thing about China is that they have a lot of holidays! Sometimes it feels like every month, there is a holiday. Sounds brilliant, but in actual fact it is pretty annoying. Being a substandard teacher as I am over here, you just about get in to your normal routine, and them BAM! A holiday comes and your schedule is all messed up. Its bloody annoying i tell you. The reason that it is annoying is that the Chinese don’t do holidays like we do them in the UK. Here when there is a holiday you have to work your balls off before and after the holiday to make up for the time that you are getting off. So it doesn’t really feel like much of a holiday. The second reason why holidays suck as a teacher is that you can only take holidays…during the holidays. You may be thinking…”whats the problem with that?” so let me tell you what the problem with that is…every single person in China also travels over that time. And China has a shit ton of people.

But despite all the negatives…these are the only chances i get, so you just have to take the rough with the rough and get on with it. So that is exactly what i did. At the beginning of May we had 4 days off, and so my girlfriend and I, my friend, his wife and daughter all went away to a beautiful place called Zhaoqing (Jow-shing). We were actually pretty lucky in that the traffic wasn’t so bad, and it only took us about 8 hours or so to get there, which for China isn’t so bad!

Our plan was to spend the first night in a place called De Qing which was about 30 minutes past Zhaoqing by taxi, which was kind of like a resort thing i guess. And on a side note, these taxi drivers drive a hard bargain! We had to hustle our arses off just to get 20 RMB off the taxi fair…which is only the equivalent of 2 pounds, but even so, its the principle of the matter…never pay what they ask for!

Anyway, this resort said they had “hot springs” which were advertised as if they were beautiful and natural and found in the natural environment…but in actual fact were just swimming pools with hot water in. But nice none-the-less! There was some white water rafting that you could do, zip wiring across a canyon and a beautiful lavender garden, all of which we did!

Then the second day we would go back to Zhaoqing itself and have a look around and explore there. And in Zhaoqing there was a beautiful mountain that we went to and explored all day. Taking small boats from island to island around the mountain and then going through the base of the mountain on another little boat and seeing a Buddhist temple built in to the side of the mountain .

All very very cool and interesting!

So anyway, less of my blabbing, lets looks at some of the shots that I took whilst there, I hope you enjoy! 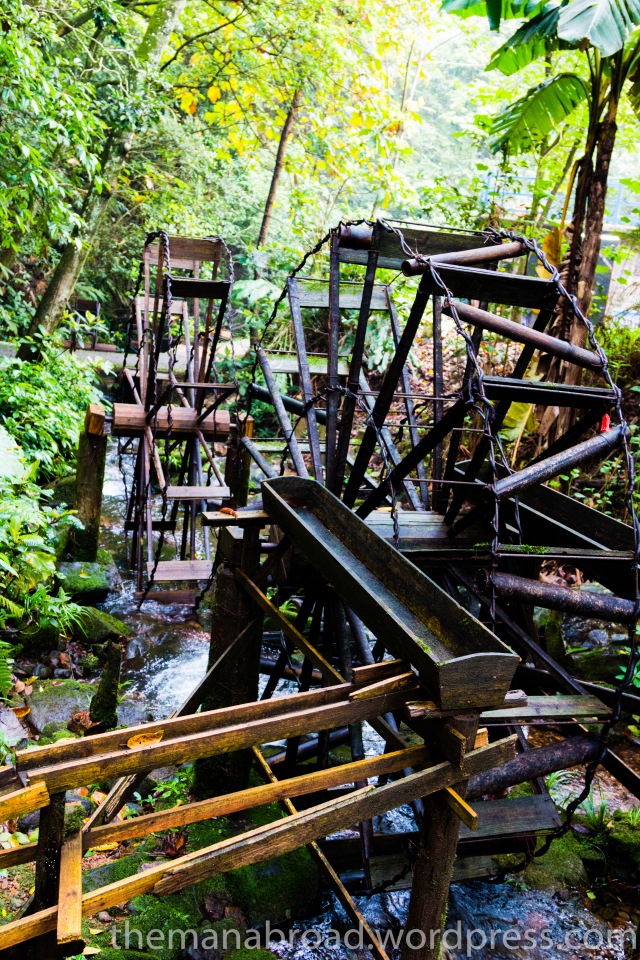 All over De Qing there were loads of these beautiful watermills (above), this was one of the larger ones, but very pretty and picturesque.

De Qing wasn’t really a mountain as such, but it was very high, and all the way down to the car park there were loads and loads of beautiful waterfalls, some big some small. I had intended only to put up maybe one or two photos of these, but I just couldn’t choose between these ones, so I just decided to show you all of them! Why the hell not! 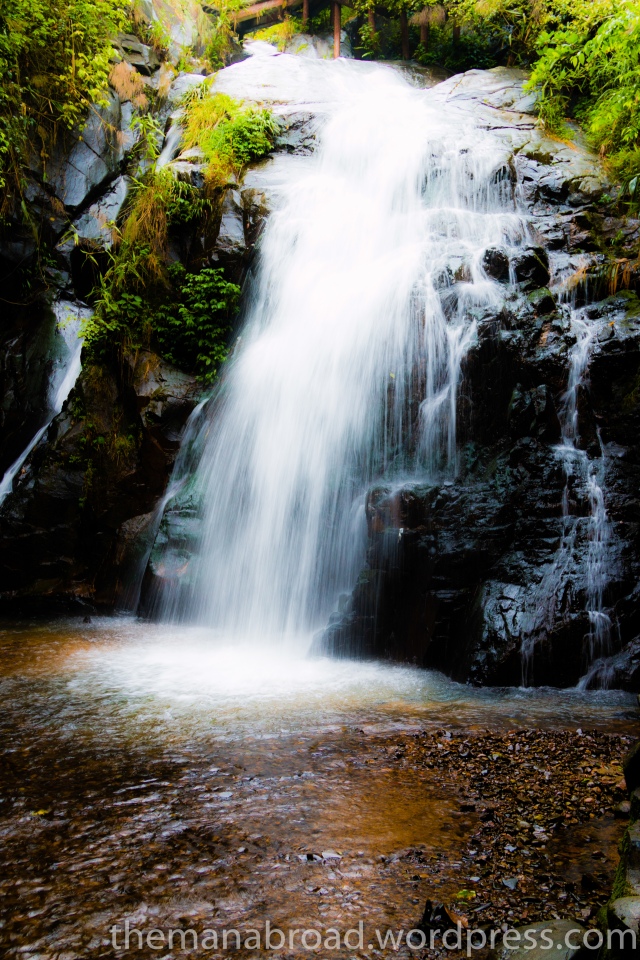 This is me going over the canyon on the zip-wire, amazing view and really good fun. It wasn’t really until I got half way across that I thought to myself…if this wire breaks then I am dead. And the Chinese are not renowned for building quality items that are durable. 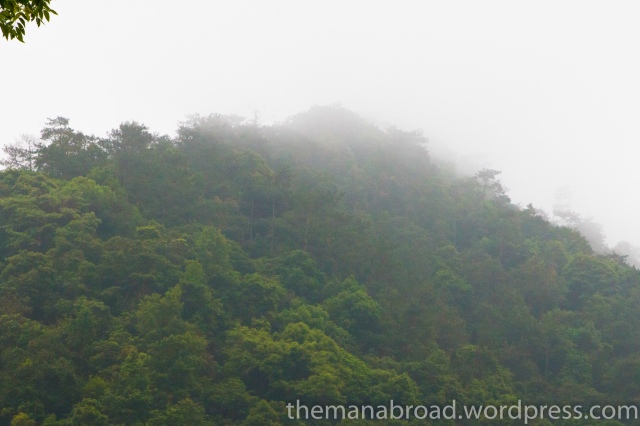 This next handful of photos below were taken at the lavender field, very beautiful. So many Chinese holiday goers posing for photos, or taking photos of their posing loved ones. Very funny, and then dotted around are these workers who tend the field; just watching all these fools (myself included) posing for photos.

If there is one thing that I have found the Chinese love doing, its posing for photos! 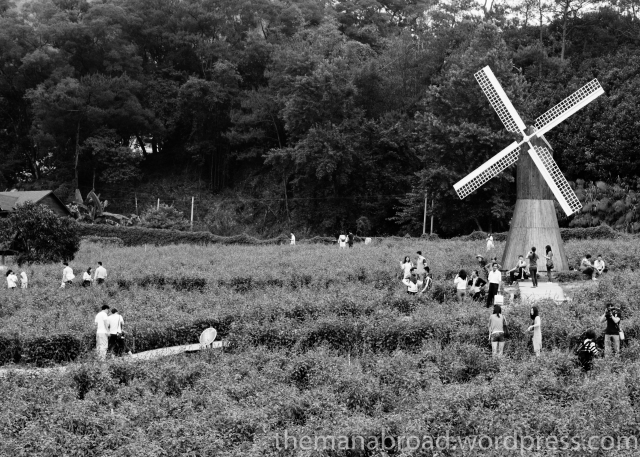 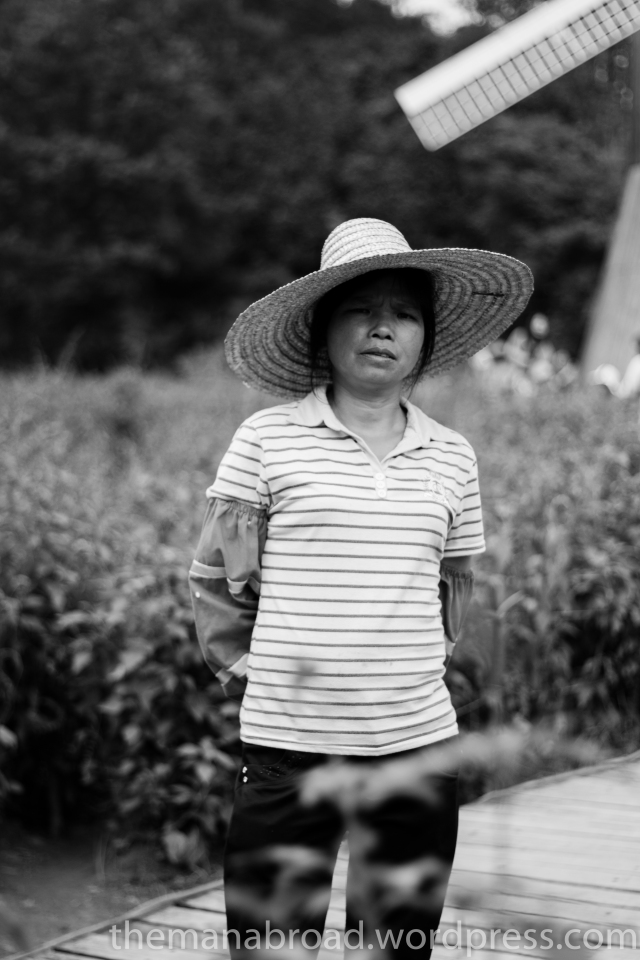 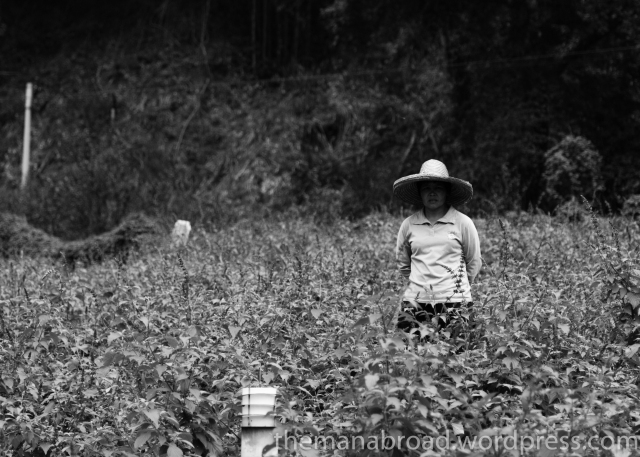 I couldn’t be in China and not get a photo of a red lantern when I see one. It just wouldn’t feel right! 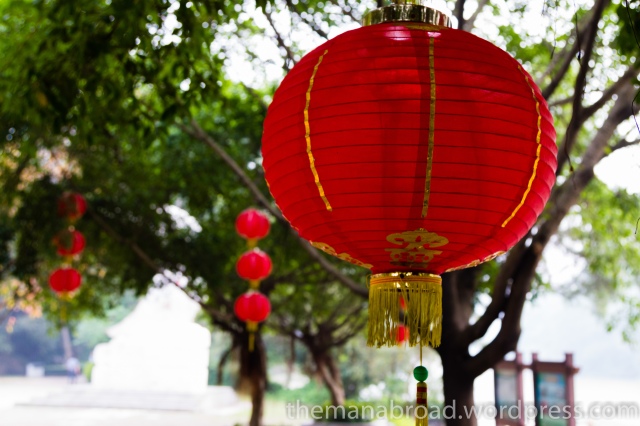 Whilst island hopping around the mountain on the second day, we got to this small little island where they had loads and loads of Red Capped Crane’s, some of which they had laying on eggs, pretty cool really. On the viewing post from this point they had locals selling small eels and red sliders (terrapins). The eels to feed to the birds, and the sliders to be released back in to the river (all for a price of course!), probably just to be caught again and sold to would-be charitable people. 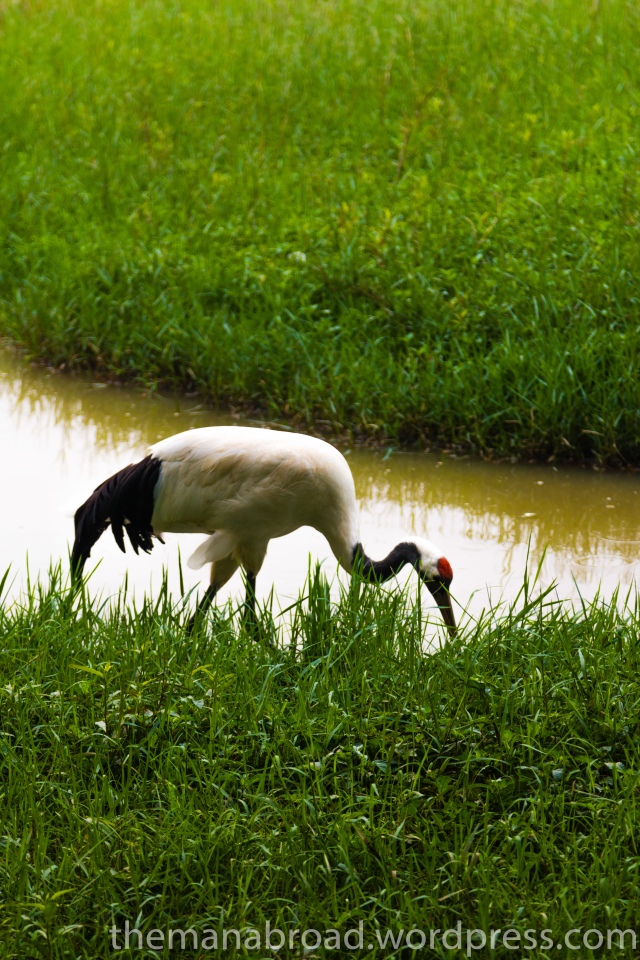 I love getting photos of the old girls and boys just chillin’ and watching life go by. I always think that they have such a lovely relaxed lifestyle! 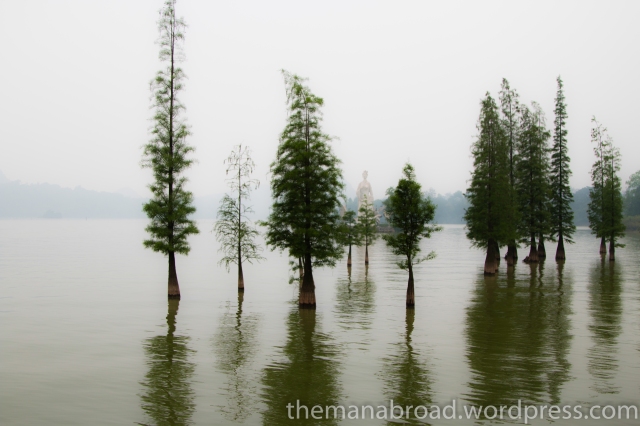 Below are some photos of the Buddhist temple built in to the side of the mountain that we visited on the second day. Every temple of you go to there are always LOADS of incense sticks burning. In Hong Kong on Lantau island, there are so many that the smoke is so thick that it has me in coughing fits! 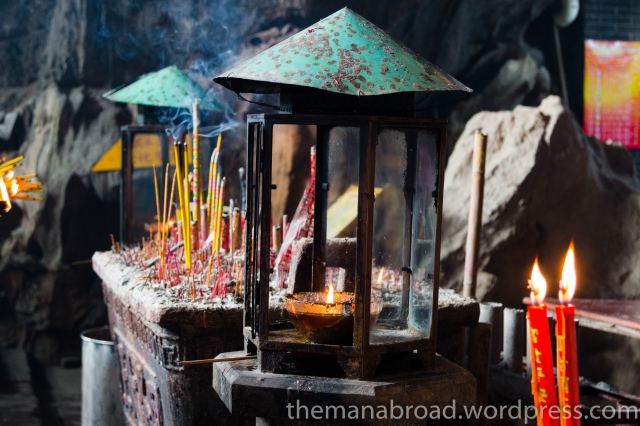 The Chinese believe that if you through money on to the back of a real turtle, that it will bring you good luck…no comment!

I remember going to Guangzhou zoo last year, and seeing a small fortune on top of the local turtle populace! Lucky for the keepers i’d say!

This picture below was the entrance to the cave t hat we boated through that went through the base of the mountain. The ceiling was so low that we were practically hugging our knees as we were going through. It would have been absolutely beautiful in there had it not been for the array of bright LED lights all the way through. If they had just used some soft almost natural light, it would have looked lovely. All the greens, yellows, purples and reds didn’t really do it justice however.

The blue looked good though. (below)

Well I hope you enjoyed the photos from Zhaoqing. It really was a beautiful place, and if you are ever in the Guangdong province then I would highly recommend you went there and had a look round. If you could though, I would say try and avoid the holiday seasons!

Next week I shall be taking you around some of the local food markets in Huizhou.

Please leave any comments below if there are any questions you have about China, my experiences or advice should you be looking to come out here.

I am themanabroad, known by my friends as James and my colleagues as Zhan Mu Si (Jaa More Suur(James in Chinese)). I have always been enthusiastic about photography and travelling, since school always trying to sign up for photography classes that always got cancelled unfortunately. However, living in China has given me the time and opportunity to combine my two loves, so please come and join me in my life in South-East Asia.
View all posts by themanabroad →
This entry was posted in China, Travel Photography, Uncategorized and tagged adventure, China, environment, guangdong, guangzhou, Huizhou, life, people, photography, travel, travelling, zhaoqing. Bookmark the permalink.